Be Informed. Get Involved. Stay Connected.

After two years of fundraising, planning, and negotiating, the Civil War Monument has found a new home. Soon to be joining the 1927 monument on the northeast corner of the courthouse lawn are the two Civil War cannons dating back to 1858. 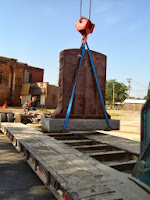 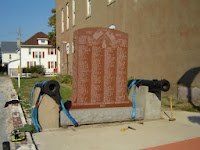 The Montezuma CLG group, in the hopes of preserving and showcasing history within our community, spearheaded this project with the help of Montezuma Community Development, the Blakely-Stevens American Legion, and the Poweshiek County Supervisors. We were also the reicipient of a generous donation from the Poweshiek County Alliance, without whom, none of this would have been possible. 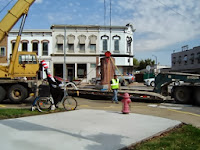 A huge thank you to Sheets Excavating and Bushong Construction for their help in making this move happen! 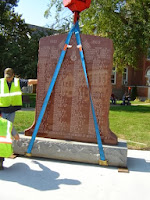 Don't forget to checkout this week's County Seat Market Fair this Friday. The Market Fair is a new event series that offers local and surrounding communities an opportunity to come together to offer homegrown, homemade and a variety of items from local vendors.

You can find us in Montezuma at the corner of 2nd & Main. One block east of US Highway 63, just south of Main Street (Just north of Peoples Bank). Vendors include coffee, mints, salsa, produce, plants, unique items, and more.

Even if you don't find vendor offerings to your liking, there are more reasons to come to the Market Fair. The entertainment this week is "Karaoke by Scott Farrington. The entertainment is free thanks to our sponsors. Future acts scheduled included Drum & Strum, Too Many Strings Band, Breaking Adam, and King of Clubs. So there are different genres for different tastes in music. But go ahead and sample them all.

The meal vendor this week is the Montezuma Study Group. They will be serving up grilled items. The Montezuma Women's Study Club meets monthly with programs to explore opportunities and personal experiences found in the community. Bea Hensel is the current president and anyone interested in joining should contact her. The group sponsors two or three scholarships for Montezuma High School seniors. They also give donations to the Montezuma Food Pantry as well as other community projects that arise.

Active community member, Janet McKee says, “A great location for a summer evening meal, local vendors, and music. Bring your lawn chair, relax and stay a while, visit, and enjoy.”

For anyone that might say that there is nothing to do in town, now's you chance. The Market Fair is scheduled for the first and third (and fifth) Friday of June, July, and August from 4:00-7:00 PM. The entertainment act is different each time. The meal vendors are a variety as well. Whether you can make it this week or not, make this part of you Let Celebration Ring weekend on July 5th, as well as the rest of the summer. Keep informed with our website at CountySeatMarketFair.org. Post it on your Facebook page, tweet it out and tell your Google+ circles.

So tell and bring your family and friends and enjoy a late afternoon/early evening of fun, food and face- to-face socialization. Bring your lawn chairs as well as playing cards, checkers, chess, backgammon, or just yourself. This is a great way to kick-off the weekend.

Posted by Executive Director at 9:34 AM No comments:


I came across an advertisement recently that has really stuck with me. It is a Lowes ad where a new couple moves into town and places a potted plant in a window box. This leads to the neighbor planting a flower garden, which leads to a painted fence, shutters on a house, and so on. Near the end of the commercial, a voice over comes on and says, “Home improvement is contagious.”

How true is that? I can’t even count the number of people who have taken notice of the construction, renovations, and curb appeal being done to buildings around the square. I think it’s more than just an attempt to “keep up with the Joneses.” Like the ad noted, I think it’s contagious.
Since the induction of the Community Development position in Montezuma last April, there has been so much excitement and movement in this town. The thousands of dollars of grant money and donations have already made a lasting impact on our community through beautification, events, building purchases and business expansions. So, let’s take it one step further, shall we?
As we are still eagerly awaiting word of the recipients of the façade grant, let’s keep moving forward. Let’s let the betterment of this community become contagious.
To help us visualize such growth and revitalization, I am challenging you to send photos of your various improvement projects over the last year, be it home or business, to montezumaiowaorg@yahoo.com. We will begin showcasing these improvements and projects for others to catch the bug of property improvement.

As always, community development is only made possible through the support of the people in and around it. To give to Montezuma Community Development or to learn about volunteer opportunities, contact the office at (641) 623-7600 or send to Box 314, Montezuma, IA 50171.
Posted by Executive Director at 8:44 AM No comments:

It's not always glamorous behind the scenes; and credit is usually not given where it is due.


Last year, Montezuma received a face-lift with banners, hanging baskets, and new concrete planters. There was a real focus on making lasting improvements in regards to community beautification. This year, we were able to go even farther with a grant from Keep Iowa Beautiful to enhance our city entrance signs.

As someone who just stepped into this position three months ago, I have to pass on much of that credit to Terence Blain, who worked tirelessly and thanklessly last year to get the ball rolling in so many areas of community development. Also to be recognized is Kevin Kudart and the Electric Department for hanging and recently lowering the basket hangers by a foot. I know the volunteer watering crew is greatly appreciative.

Thank you also goes out to the Montezuma FFA for working closely with Montezuma Community Development to plant our baskets and planters this year. The baskets are yet to be hung, but the planters look fantastic.

Thank you to Vannoy Chevrolet for providing the equipment and water for the water tank.

Thank you to the community groups who have voluntarily adopted the city entrance signs and helped to plant them. They include the Montezuma Methodist Choir, the Montezuma Nursing and Rehab Center, the Montezuma Lions Club, and a Montezuma Young Adult  Small Group.

Thank you to those who have contributed to community beautification, as well. A special thanks to the Montezuma Public Library Board and the Poweshiek Leadership Program for their generous giving.


Even though Spring 2013 has been full of strange, rainy weather, the city has been planted and it looks beautiful.

Thank you to all who participated. None of this is possible without your help. 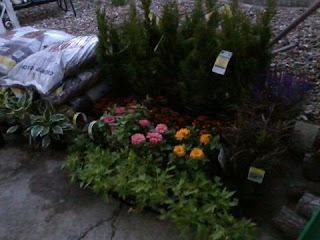 Posted by Executive Director at 8:43 AM No comments:

For everything, there is a season

For everything, there is a season. Even if it's proving itself difficult, Spring will eventually come, leaving behind the dormancy of winter. As I walked around the city square today, I believe the same thing can be said of Montezuma.

For the past several years, there have been many attempts to revive our community; to bring it back to a former shine; to build it even bigger; to leave a better place for a future generation to call home. I believe we are truly starting to see the season in Montezuma, and that season is bringing revitalization, rehabilitation, and growth. 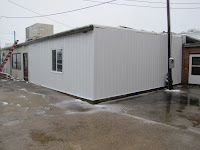 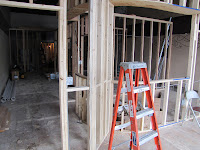 There are several projects happening at the moment, and even to a passerby, they are noticeable changes. Family Dentistry has dove in to construction on the north half of the former Apple Basket. Studs are in place and walls are about to become a reality. The back entrance has seen a makeover, as well. With this kind of progress, an early summer opening is a definite possibility. 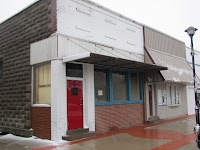 Nearby, the former County Seat Bar has been converted into usable space for fitness center Boot Camp Madness. They have been open on the north side of the square for nearly a year and have outgrown the space.

The new space has been cleaned and gutted, revealing original tin ceilings and ample workout space. The façade of the building has been cleaned and painted, as well. These two projects will bring some much needed foot traffic and aesthetically pleasing additions to the east side of the square. 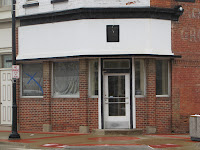 On the north side of the square, the Monte Tap has been getting a face-lift of its own. Owner Aaron McCaslen is expanding his restaurant and bar into the south portion of the building. Renovations are underway for an early summer opening that would include dinner service.

Jumpin' Jimmy's, the restaurant and bar located at Lake Ponderosa's Marina, has opened for the season.

Just 4 U Consignment on East Main is now Tracy's Treasures. It will continue to offer  consignment items.

We're still awaiting word on the façade improvement grant, which we believe will be a springboard for economic development and revitalization in our community. But even without that, there has been  movement and activity, and as we sit ever so patiently waiting for the next season, we can see that it is near.

Community revitalization is only made possibly by community wide support and patronization, as well as financially partnering with our organization as we continue to advocate for all areas of Montezuma. To give or volunteer, please contact us at montezumaiowaorg@yahoo.com or call 623-7600.
Posted by Executive Director at 8:20 AM No comments:

You know when you've invited a guest to your home and they arrive much later than promised? It's annoying and tiresome sitting at the window, waiting for them to turn in the drive. Well, we invited Spring over to our home months ago. It's about time she showed up!

In spite of the cold, wet weather, April has been an incredibly busy month for community development in Montezuma.

As always, we are looking to widen and deepen our support both in the community and with those connected to Montezuma. If you have any questions, comments, or would like to give to Montezuma Community Development, please contact us at montezumaiowaorg@yahoo.com or montezumaiowa.org.

Also, for those of you not living in Montezuma, we would love to hear what it would take to get you to consider our beautiful little town. Please fill out the following survey. 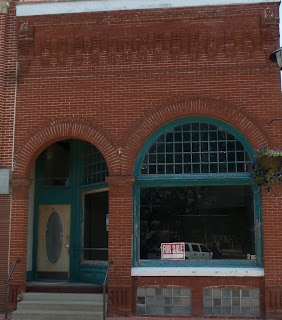 The first phase of the development project will be completed with two professional office expansions.  Family Dentistry of Grinnell will begin construction immediately on approximately 2500 square feet of space located at 103 South 4th Street.  The full-service satellite clinic will initially be open three days a week and is expected to be in operation by June 2013.

Mahaffey Law Office at 107 South 4th Street will also be taking on a 1200 square foot office expansion as an annex to their current space.  The law office is expecting to grow in the near future and plans to accommodate for additional staff and meeting space.


Montezuma Community Development continues to plan for the remaining portion of the building which housed the former Apple Basket Restaurant and Grill.  The organization is currently accepting business proposals to lease the space for restaurant or retail use.  Prospective plans should include a business narrative, 2-3 years of cash flow projections, and available cash or secured financing for start-up.

To find out more information or to request a tour of the building, please contact the Montezuma Community Development office at 641-623-7600.

Posted by Executive Director at 2:18 PM No comments:

Proud of Our Local Industry